Nightdive Studios are running a Kickstarter-campaign for System Shock: Remastered. Linux has been a stretch goal which has been reached a few days ago so we're getting this game, too!

There are → still 4 days left if you want to pledge for this game. You might want to try their Linux demo (→ humble, → GoG, → Steam) or watch some minutes of Linux gameplay on YouTube. 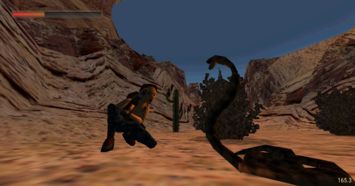 It looks like that there's another open source reimplementation for a popular game series which I did not recognize earlier. OpenTomb is be among these, supporting Tomb Raider 1-5.

OpenTomb is an open-source engine reimplementation project intended to play levels from all classic-era Tomb Raider games (TR 1—5) and custom TRLE levels. The project does not use any old Tomb Raider source code, because all attempts to retrieve sources from Eidos / Core were in vain.

Instead, everything is being developed completely from scratch. However, OpenTomb uses certain legacy routines from such unfinished open-source projects as OpenRaider and VT project (found at icculus.org), plus it incorporates some code from Quake Tenebrae.

All in all, OpenTomb tries to recreate original Tomb Raider games experience, although with contemporary updates, features and additions — to fully benefit from being running on modern PCs with powerful CPUs and graphic cards — unlike original engines, which are getting older and older (original engine, on which all classics were based, will turn 20 next year).

Dave Airlie and Bas Nieuwenhuizen are currently working on their own Vulkan driver for Volcanic Islands cards, SI and CIK might be supported later!

I was waiting for an open source driver to appear when I realised I should really just write one myself, some talking with Bas later, and we decided to see where we could get.

This is the point at which we were willing to show it to others, it's not really a vulkan driver yet, so far it's a vulkan triangle demos driver.

It renders the tri and cube demos from the vulkan loader, and the triangle demo from Sascha Willems demos and the Vulkan CTS smoke tests (all 4 of them one of which draws a triangle).

I'm glad to hear that someone's working on an open source reimplementation of Gothic's engine called "REGoth". It's designed for Gothic 1 and 2 and runs on Linux. A nice addition to OpenMW, GemRB, xoreos, Freeablo, OpenRA and many other, great reimplementations.

You can find the code on → github.

Day Of The Tentacle Remastered Released For Linux

Day of the Tentacle Remastered has been released for Linux. It has been ported by → cheeseness and can be bought via → GOG, → The Humble Store or → Steam.

Mesa 12 Has Been Released

Mesa 12 has been released a few days ago and they've already have a bugfix release (12.0.1) ready. Expect fresh builds on deb.c-r-t.tk/ later this week.

This release has massive amount of features, but without a doubt the biggest ones are: