Remember when I posted that TW2 will arrive on May, 25th? And troublesome release dates, delays, and so on? Guess what. TW2 for Linux has been delayed to June, 15th. Seems that we've gotta wait again :D

I've decided to post about missing Linux ports which have been promised by devs, publishers and so on. These are games which I'm personally waiting for. If you want a even more complete "hall of shame", visit → gamingonlinux.com/.

These games are cheap now. I wonder if these/their publishers are gonna complain "Linux doesn't create enough income to satisfy porting costs/to be worthwile" if they are released soon. It probably would have been, if their ports would have arrived early enough.

If you want to try D3D11 on Linux with WINE on Radeon GPUs with Mesa, you've got to tell WINE, that it has to use OpenGL Core Profile Contexts: 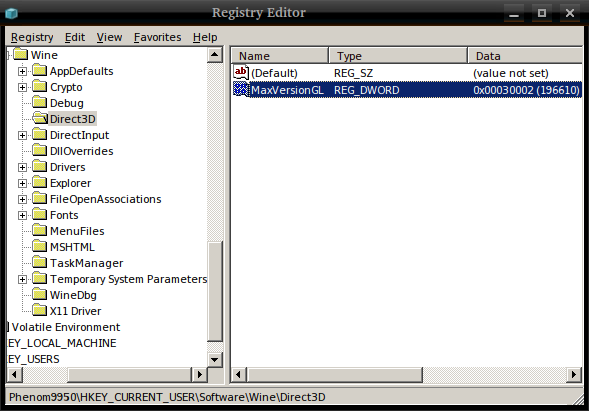 Just add MaxGLVersion (dword) with 0x30002 to HKCU/Software/Wine/Direct3D and you're fine.

I'm currently transitioning to an OBS-based build server for my Debian packages. Fresh Mesa packages with Gallium-Nine will be delivered when it's all up and running. Sorry for the inconvenience!

Don't hesitate to throw some Satoshis at 1DUug51v3LwEZk6RzJ5qCpi8fYKnHYbCCb if you want to keep me motivated. Thanks!

The most interesting features are: