Again, these are just the debs from AMD’s official GitHub.

I've uploaded Mesa 21.1.0 and libdrm 2.4.105 to my personal Debian repo at deb.c-r-t.tk. Both packages are pulled and rebuilt from experimental.

My server has received two hardware upgrades after my latest post and is now running on a slightly older but more powerful platform which allows me to host more services in the future. More speed, more and faster storage, more RAM, a little more power consumption but we'll see how far I get.

Several months ago I've added a second web server vm for hosting a Hubzilla instance. After some weeks of testing I have decided that I'm going to deprecate my → Diaspora* account in favor of my new → new Hubzilla channel. It's been running great so far and enables me to communicate with more users in the Fediverse (Mastodon wasn't reachable via Diaspora* for example) and having the database on a storage device with dramatically faster access times has been speeding up things a lot.

Additionally to hosting an own social media node I have just added another vm hosting a private → Owncast instance. It allows me to ditch Twitch (hehe) and Piczel.TV for streaming if everything works fine.

To keep you updated more I'm planning to add cross-posting from Hubzilla to my blog in the future. It would be nice to write everything in one place, wouldn't it?

Looks like Mesa's official documentation has gotten rid of documenting the R600_DEBUG environment variable. One can still get help for the parameters by passing R600_DEBUG=help

Currently it outputs the following information:

Let's see how far we get.

The Future Of My Debian Repo

I've decided to remove Mesa from my personal repository located at deb.c-r-t.tk/ and perfom some kind of cleanup.

Other packages which are going to be removed:

Packages which are going to stay (~) or might being added (+):

Other items might be added to these lists during next week.

I've enabled web-based registration and got it working properly. It will remain open until I get notice of spammers running over my server.

Container migration hasn't been done yet but I will probably have some free time during the holidays. I also hope to restore all of the other features which have been missing since some plugins stopped working.

As some of you might have noticed, registration on my XMPP server has been closed for a while now thanks to spammers. I've already tried to re-open it through Prosody's register_web module but unfortunately my bug-ridden Prosody installation isn't going anywhere. It's the same old x86 container which has been running on my old Coppermine-based server so it's time for a change. When I finally got more time in the next weeks, I'm moving the data to a new x86_64 container.

Just in case you're in need of a free XAudio implementation (XNA/FAudio) for your vanilla wine, you should take a look at → Kron4ek's GitHub repo.

This is just a friendly reminder. Mesa → 19.0.4 has already been uploaded last weekend.

Seems That Uplay Is Finally Working With Wine

I haven't looked at Uplay in ages but it seems to be running fine now: 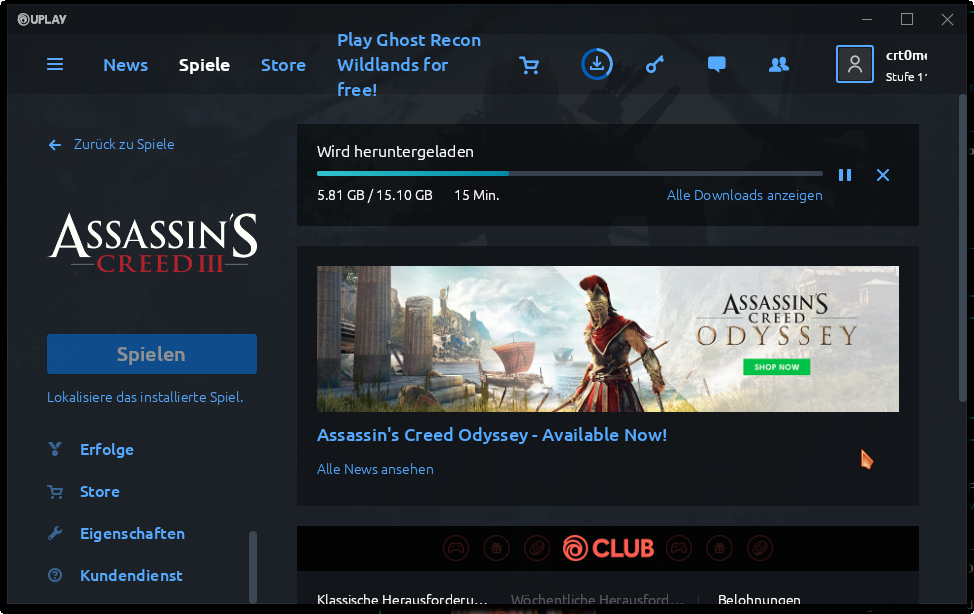 If You Happen To Be Looking For Origin ...

TBH, Origin on Linux has ever been a PITB experience for me. I found a working solution → on yingtongli.me which needs to have the package inotify-tools installed. The fix is simple. Install dxvk in your wineprefix and run the following commands (assuming you've set $WINEPREFIX):

Or if you're running a 64Bit wineprefix:

Kill that inotifywait-scriptlet when Origin is installed and ...